By The Culinary Cook

The Definitive Guide on Roux and a One-Step Recipe

The recipe for roux is easy.

One part flour, one part oil.

See? Simple right? Yes, but actually no. The recipe might be simple. But using roux properly can be difficult and frustrating. That’s why we attached this guide to that one-step roux recipe; to help you use it like a professional.

Classically, roux was used in conjunction with the 5 Mother Sauces (To learn more about mother sauces, check out our post here) of French cooking. It was used with lard or vegetable oil. This is the primary use in most traditional French cooking.

In Cajun cooking, roux is traditionally made with bacon fat and flour cooked to a brown roux stage which makes it much more flavorful.

Japanese cooks can make a type of roux called curry, or karē (カレー). This can be made by frying yellow curry powder with butter/oil and flour.

Roux is the backbone of many dishes, soups, and sauces and has been used for many centuries and is a staple of classic French cuisine. A roux is simple in its make-up but extremely versatile in its use.

When learning how to thicken a soup, a roux is typically used and to make a roux is easy using a flour/fat mixture. The texture given from a roux is one of the biggest benefits of using it versus something simpler like a whitewash or slurry.

If you need additional resources on thickening agents and its application, be sure to check out our related articles. They are excellent resources and references.

Roux vs. Other Thickening Agents

The silkiness can be attributed to the combination of the starchiness of flour and fat. As the fat binds to the flour, it eliminates any rough granules. Because of this, the thickening power of the roux helps bind to other fats in the sauce or soup allowing it to thicken naturally.

Cornstarch and water, also known as a slurry, gelatinizes. Because of this, a slurry tends to feel stickier and can be unnatural in recipes that don’t call for such a texture. On the other hand, it works wonderfully in thickening sauces such as teriyaki and American Chinese cuisines.

A flour/water combo, known as a whitewash, is a low-cost alternative but will not impart the same texture as a roux. I typically use a whitewash when I want to bring together a sauce or soup and help reduce the wateriness.

Roux can be easy, but it can also be made difficult. Not having the proper tools can hinder your efforts. I have taken my years of experience in professional kitchens to help recommend the right products on Amazon for you to purchase. It also helps support The Culinary Cook as anything you buy through our links pays us a commission at no cost to you.

The Culinary Cookbook is a fantastic resource to have at your fingertips. Downloadable on any device and packed with professional recipes, the value offered is incredible. Learning the same recipes taught in major culinary arts programs makes our cookbook a must-have for any skill level – From home cook to culinary students, to line cooks.

In our current issue, we bring over 40+ recipes with highly in-depth recipes, tips, and techniques all brought together in a beautifully crafted high-resolution downloadable PDF. Available now! 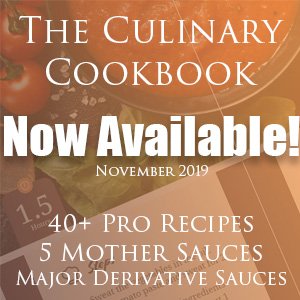 Thick-bottomed and durable stainless steel saucepots are a must when cooking a roux. While non-stick will work, those products cannot handle high temperatures without off-gassing toxic chemicals which can be harmful to your health. If you do not already have a solid saucepot, be sure to pick one up. They do not have to be expensive. To check out our recommendation on Amazon, check it out by clicking here.

Seems silly, but you need to have a proper whisk if you want to cook roux properly. I recommend a stainless steel balloon whisk and you can check out my recommended product on Amazon by clicking here. I would also avoid silicon whisks or any other cheaper whisks as creating roux means vigorously whisking to ensure proper combining.

What is the Roux Recipe?

A roux recipe is simple. A combination of equal parts (1:1 Ratio) flour and fat by weight. The fat can be any fat, including lard, butter, oils, etc.

Flour and fat are then cooked together to form a paste. Cooking the flour in fat will coat the starch/flour with the fat and prevent them from clumping together when introduced into a liquid. In some professional kitchens, roux is prepared prior and used as needed throughout the night. For the home cook or smaller restaurants, it is made separately for each recipe.

The Three Stages of Roux

There are three stages of roux that you may use depending on the desired outcome. Each stage has its benefits and uses. Match each to the desired color and flavor you want for your dish.

The Three Stages of Roux
1 of 4

This is the first cooked stage of roux and has a bubbly, frothy appearance. At this stage, the starches have not yet cooked out entirely. This can lead to a starchy taste imparted in your sauce. The best practice when using a white roux is to cook it out in the sauce or soup prior to it being served. This will eliminate any starchy taste.

White roux’s are used in white sauces such as a bechamel or in dishes where color is undesirable.

The second stage of roux is a blond roux. It is in this stage where caramelization will begin to occur and gives it the dark blond coloring. The roux will develop a slightly nutty flavor and smell crisp. This is a great stage for darker soups as it can impart a bit of additional flavor. A veloute is typical for the requirements of a blond roux

A brown roux is the third stage of a roux and is heavily caramelized, giving it its distinct brown color. This roux will impart a heavier nutty aroma and flavor and is used in brown sauces or dishes where a dark color and strong flavor is desired. Because the starches break down during prolonged cooking, more roux will be required to achieve a similar thickening power.

How To Make a Roux

There is a basic recipe for making roux that is easy to follow and simple to learn. Whether you are creating a white, blond, or brown roux, the procedure is the same.

The general rule is that the temperature and amount of roux being made determines the exact cooking time. A white roux, however, needs to cook for only a few minutes just long enough to minimize and cook out the raw flour taste. Blond roux is cooked a bit longer. A brown roux will require a much longer cooking time to develop the color and aroma. Good roux is stiff, not runny or pourable.

Adding Roux To A Liquid

The most fun part is also the most anxious moment. Adding your liquid to a roux must be done in a specific way. Use these two methods to incorporate it into your liquid.

Problem: My liquid has clumps of roux in it

Solution: You either added hot liquid and hot roux together, which prevented the roux from mixing and dissolving properly. Strain and retry.

Problem: My roux is not thickening

Solution: Roux takes time to thicken when added to a liquid. Be sure to give the dish time to cook out both the starchy flavor and to allow the roux to thicken before adding more roux. If you are using a dark roux, use more roux to achieve the desired thickness.

Problem: I over thickened my sauce! Can it be saved?

How Much Roux Should You Use?

To properly calculate the roux you will need, use the multiplier and multiply it by the amount of liquid you are using. I highly recommend using metric for this conversion to help simplify things.

0
Oil and Vinegar: Opposites Attract Cooking oils and vinegars are an essential component in the culinary arts and occupy a close position to many chefs...
Read more
Condiments

0
Guide to Herbs, Spices, and Flavorings for Food and Cooking Becoming a good cook involves having a wide range of flexibility when it comes to...
Read more
Cooking Basics

With 15 years of experience working in restaurants, resorts, and a fully Red Seal Certified chef, The Culinary Cook shares tips, tricks, and recipes for everyone to enjoy.

How to Master Smoking Meat, Salt-Curing and Brining

How to Make Terrine Easy and Simply

The Culinary Cook was founded in 2012 and is committed to developing professional level content for all aspiring chefs and cooks.

The Culinary Cook is a participant in the Amazon Services LLC Associates Program, an affiliate advertising program designed to provide a means for sites to earn advertising fees by advertising and linking to Amazon.com.

How To Make Minestrone

Basic Cooking Methods and Techniques You Need to Master